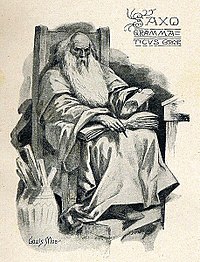 Last night I saw The Northman, the new film set in the world of the Norse/Vikings and directed by Richard Eggers.

It is a story of vengenance, and ultimately also of the tragic futility and self-destructiveness of vengeance. But no spoilers this early in the film’s viewing life.

What I most appreciated about it was its recreation of the material and mental world of the Norse/Vikings, and the strangeness of that world to our modern minds. It made the strangeness clear – the violence, the shamanism, the slipping between different levels of reality, dream and vision, the slavery – and yet also familiar to our own mental world, as in the image of the closing scene. I especially enjoyed the musical and sound world created during the film. It presumably can only be an imaginative recreation – since sound is unrecoverable in history before 1890 – but was a terrible old beauty.

For me it was timely since only a few weeks ago I released a podcast on the Norse myths and their place in history and culture – When Winter Came and the Norse Myths were Born. Apple I-Tunes link is here

The key source I used for my podcast was Richard Price, The Children of Ash and Elm: A History of the Vikings. Price was one of the historical consultants for Eggers’ film, and some of the themes, ideas and images I discussed in the podcast were used in the film. There is an interview with Richard Price here on his work advising on the film and why he describes it as the most accurate Viking film to date. He comments particularly on the mental world of the Vikings, which I tried to convey in my podcast. Price says:

In academic circles, the phrase for mythology is a “non-real reality” because it’s real for them. That’s my special field, in archaeology: the idea that asking if somebody back then believed in Odin was like asking if they believed in the sea. It would be a stupid question. Everything is just there, and they have their complete explanation for what’s going on. As in his previous films, it’s still ambiguous. If you want to, you could just go for it and say that all the mythology is real. Or it’s a dream. Or visions. Or you’re seeing their experience manifested in images.

I also noticed during the film the likeness between the name of the main character, Amleth, and Hamlet, and the plot similarities as well. A little research after the film revealed that indeed The Northman is based on the same story that Shakespeare based Hamlet on. This story of Amleth appeared in multiple Norse, Danish and Icelandic sources from 900-1300. But Shakespeare, and Eggers, based their retelling on the account recorded by Danish historian Saxo Grammaticus (c. 1150- c. 1120), who now enters the honour roll of The Burning Archive for saving the culture of the Norse from the flames. His version has now been retold again with the benefit of a generous imagination and assiduous scholarship in Eggers’ fine film, The Northman.