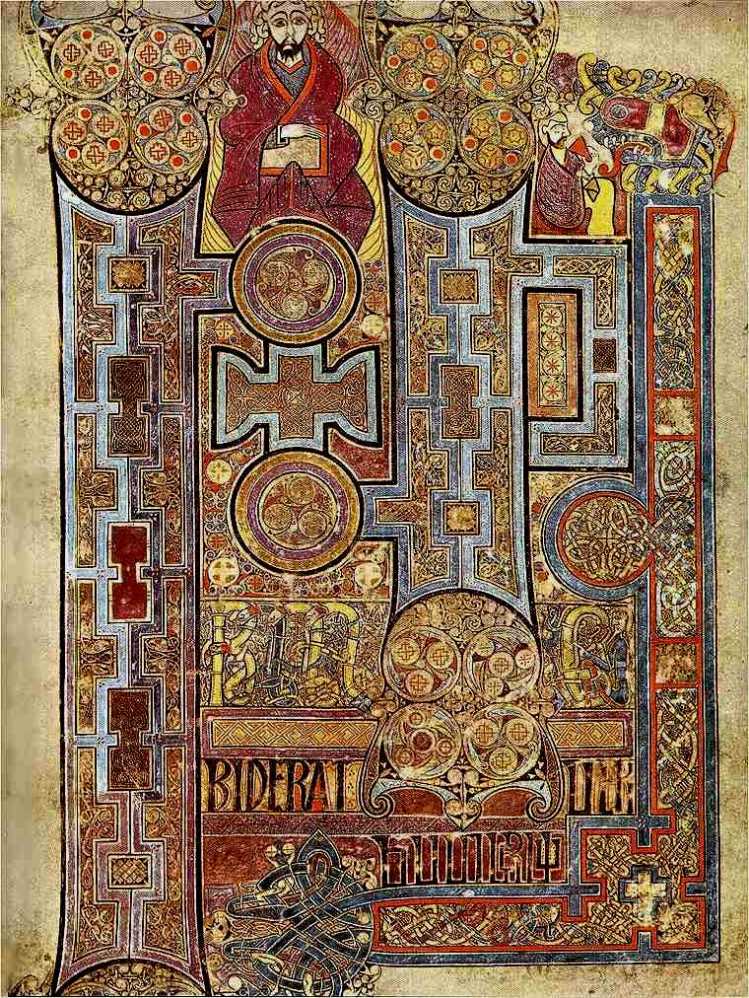 Out of a whim, I opened again, as if for the first time, that great scary book of twentieth-century literature, that dream book of all language  and literature, James Joyce’s Finnegan’s Wake. For the first time in my life, I got past the second page; I bought it dutifully in my twenties, knowing it was the uncontrollable and infinite jest of Joyce’s late life, but despite all my pretensions I could not persist with its polysensical language. This time, though, I read through the first twenty pages and made some kind of peace with this war on words.

The image that let me enter the maze, despite all the warding off spells of those first pages, and the first encounter with bababadalgharaghtakamminarronnkonnbronntonner
ronntuonnthunntrovarrhounawnskawntoohoohoordenenthurnuk! – the thunderclap marking the fall – was that Joyce conceived his work a bit like The Book of Kells, as a masterpiece of miniature elaboration. The compounded words, the echoes and shouts of 85 languages, the joyous variation of names and myths and quotation, the puns, the penetration of ancient ideas with modern demotic potty language (penisolate wars) and the ideas of the modern fall (jung and eerily freudened), the puns that make you laugh before you understand, and the proliferation of meaning were all intricate illuminations that made this artwork uniquely identifiable and yet universal in its celebration of the glory of language and literature.

Finnegans Wake would seem at a glance the most esoteric of works, the ultimate symbol of a book that might consume the life of a modern scholar. It would take a lifetime to read this work, and still it would not be possible to know what it was all about. Beckett said that it is what is about. And so some think it was a cruel joke – the ultimate fodder for a Joyce industry of academics, who dedicate their lives, with other people’s money, to making one sense of this polysense. The book cannot be explained, you would think, it can only be admired or explored. But its sheer inexplicability, its reputation as a text only known by a few rare graduate literature students would seem to lock this wonder away in the closed and dusty parts of our burning cultural museums.

But, no. The book that can defeat any single reader is reborn by the network of readers of the world wide web. So we read that the Wake was the book the web was invented for. A thousand lives of scholarship – or should we just say readership? – can live forever on a single web page. So I discovered, after reading my twenty pages, that the whole marvellous thing can be read online, complete with glosses, and notes and explanations and hints for this gargantuan and rabelaisian cryptic crossword. So in just the first word on the first page – riverrun – I learn there is a running motif of a letter from a reverend, a running river (the Liffey, or, the beautiful to say, Anna Livia Plurabelle), an allusion to Samuel Taylor Coleridge’s Kubla Khan (‘In Xanadu… Where Alph, the sacred river, ran’), a hint of Italian (riverranno, meaning (they) will come again), a hint of French (rêverons: (we) will dream), and of French again (reverrons: (we) will see again, (we) will meet again).

And this joyous celebration of literature’s greatest wonder is open for all to see and to build on. The Finnegans Wake Extensible Elucidation Treasury allows all to comment, and so add meanings that others have not seen, like a never ending twitter feed. The waywords and meansigns project sets the Wake to music. A visual artist is meticulously illustrating each image of the work, so circling back on the Book of Kells and turning this modern gospel into an illuminated manuscript again, named Wake in Progress, itself an allusion to Joyce’s working title of the book, work in progress. And so do we not see here the commodius vicus of a true cyclical view of history and culture? Do we see how paradoxically the great invention of modern mathematics and science has allowed a return to “religious, truthful, and faithful” pursuit of Giambattista Vico’s “poetic wisdom”, as practised by the illuminators of the Book of Kells, by Joyce, and by the elucidators of the wake? And this is happening beyond the walls of the academy, returning poetic wisdom to a deep if rare popular culture.

So can we say then that, even if the archives are burning, the great flowing riverruns of culture give back the eternal life of words to those who live and wake outside the ashen towers?

Jeff Rich is a writer of poetry, essays, history and prose fiction. He lives in Melbourne, Australia. View all posts by Jeff Rich